The other day I watched the special hurling segment that was produced for 60 Minutes. It is 15 minutes of people with connections to hurling waxing lyrical about the game and tripping over themselves in an effort to romanticize its effect on the country. Maybe Donal Og Cusack isn’t quite as miserable as he comes across, perhaps Damien Lawlor does believe the absolute scour seeping out from between his lips, and it is possible every single lad at Henry Shefflin’s old school does carry a hurley and treat it the same as their other dangling appendage (gripping it with both hands, waving it in the other lads faces and playing with it all day – except at mass apparently). Had I still been living in Ireland, I would have been thinking all of these things on first watch while rolling my eyes at the presenters clarification of the difference between “pints” and “points”.

Instead of this, I found myself dripping with melancholy, missing home but more accurately missing the sense of community that surrounds the GAA and local community events in Ireland. The phrase “Only in Ireland” is thrown around with reckless abandon these days (people thank their bus drivers in other countries too!) but this pride of place that seems to exist whenever a group of people get together does appear to have been perfected by the Irish and made all their own. A few months ago Ed Sheeran played a couple of nights in Croke Park. He wore an Ireland jersey, was joined by Glen Hansard, and one of the boys from Kodaline proposed to his girlfriend. I know this because an event this size makes news in Ireland. I know this because people are proud of Kodaline for making it big and they love a good public proposal. I know this because Irish people have adopted Ed Sheeran as one of their own (Irish granny + big ginger head = close enough). Taylor Swift played the very same two nights at Gillette Stadium to similar sized crowds and I didn’t even know it had happened until it was over. I don’t think I need to explain why this is relevant but Garth Brooks is coming to Boston in January to play six shows over four nights and the only reason I know that is because I researched it for the purposes of this post.

The point is that people rally around a big event in Ireland. This could be down to the fact that big events are still a novelty in the country but that argument is rendered useless by the sheer numbers that Irish people travel in for big events elsewhere. The fields of Athenry rang out loud at the Rugby World Cup game between France and New Zealand for fuck sake. Whether it is community based or not, a community forms out of it and the whole country, county or parish get behind it. This may happen in other countries but it is something I have yet to see in the US. It’s entirely possible that watching this hurling video (remember that thing from the first line?) less than a week after Mountbellew played in the county final could have something to do with my pensive mood. 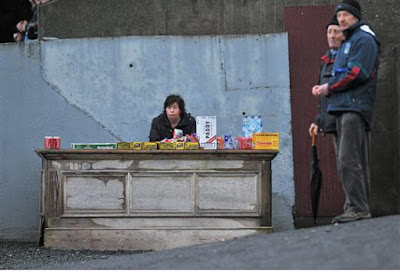 In a bed in San Francisco, I watched lads I used to try to play with go up against the All Ireland champions. I cursed their mistakes, applauded their efforts, winced at the near misses and became apoplectic at bad refereeing decisions. I might as well have been sitting on a wooden bench in the wind-swept shed in Tuam Stadium eating an out-of-date Mars bar (or togged out on the sideline because that’s a perk of having the aul lad on the management team) – but I wasn’t. I was eight time zones away and would not be up on a high stool later talking the game to death. There’d be no convincing myself or others that they had the winning of that game and they’ll be back next year and if they had all the lads that emigrated or lost interest over the years they’d be a formidable outfit.

Am I sentimentalizing this notion of community spirit and togetherness in the same way Donal Og did on 60 Minutes? Of course I am. It is easy to take it for granted when some bollocks is shouting at you from the sideline to get into the fucking game. It’s easy to get annoyed by it after seeing the 27th repost of a teenage girl’s scream-filled, shaky, vertical recording of a little red-headed fella singing a song. It can be difficult to appreciate it when you’re soaked to the skin in a 10 mile tailback on the way back from losing an All-Ireland.

Like all of the best things, you’ll miss it when it goes away and curse yourself for not fully appreciating it while you had it. There’s plenty of negativity and aloofness and “isn’t that lad a useless c*%t altogether?” to go around but it all makes for a uniquely Irish pride and sense of community that can’t be replicated anywhere in the world – only in Ireland.